From the looks your response, the hot stuff and strawberries are the favorites so far. Because of this response, I will throw out another spicy tasting bunch of ideas at you. I am sure that some of you have no idea what I am talking about when you read the title. A dipping sauce is something that you put into a small cup or container and dunk your fried mushrooms, chicken nuggets, fish sticks or what ever into. The sauce adds flavor, spicy taste, and in a sweetness that makes it all work.

We made our first dipping sauce out of strawberries. The reason we started with Strawberry was because we had SO VERY MUCH juice from the 55 gallon drum of strawberries from the winery. After we had just about emptied our container, the winery called and ask us to come back down. When we got there they told me that they wanted us to take at least 2 more drums. He said that they were beginning to thaw faster than he could use them and it would be a shame if all the berries went bad. He talked me into taking 2 more drums. On the way back to the store Mary Lynn and I tried to figure out how we could possibly used 110 gallons of strawberries. We had exhausted our ideas with the first 55 gallons. We decided to use one of the two drums for juice only. As the berries thawed they gave off the best looking juice you could imagine. I stopped and bought a plastic siphon hose, like you use to get gas out of a tank. We got our neighbors to use their front-loader and get the drums into our store. I got to work with the hose and drained gallon after gallon of juice from the barrels. We found out that once the juice was out we could scoop out the thawed fruit to use.

This is the reason the we had juice to experiment with and make some things really different.  I am not sure were Mary Lynn got the recipe or the idea for a dipping sauce. The first batches was OK but it just didn’t see right. We have never been afraid to change a recipe around to make something different. That  is how the first dipping sauce came to be. I really love the sauces because they can work in so many situations. They can be a topping for a meat or mixed with veggies when cooking. They can be with an appetizers or if you really want to get strange, a dessert topping. Don’t laugh, spicy with sweet is a combination that has been around since people started eating. Remember when you ate something that was too hot, someone would give you milk or something sweet.

We decided to give it a shot at a show. We picked a large show so that many people would have a chance to voice their opinion. I was very surprised when we sold out of our first supply. I told our customers/friends what it was. I also told them that I didn’t have anything other than a cracker to sample it on. Most just squeezed the plastic bottle and put it on their finger. I told them to imagine that they were eating one of their favorite appetizers. I believe that our customers all have a very good imagination, other wise they would have passed us by the first time they saw us. They had to imagine that the guy doing all the loud talking knew what he was talking about. That is a stretch for anyone’s imagination. I think that their finger was a chicken nugget, or something like that. Most said that they like it on a Jalapeno’ Popper. Some said they would like it on mushrooms. We got all sorts of answers about what they would eat it on. The dipping sauces are a type of fruit syrup, but plenty more than that. So I will leave it up to you to figure out what to try these on. I would like to ask a favor of you. Please let me know which one you tried and what you tried it on. Don’t be shy, this is just among friends.

To serve at a party put into a plastic squeeze bottle, but make sure the opening will not get clogged up. You can set the little cups or containers next to it. This will keep the sauce from being dribbled on your table-cloth. It will also keep people from double-dipping.

You can play with the numbers to make less for your first attempt. Afterwards make the full recipe because the longer you keep it, the better it is.

We have always made up names for our products to make people laugh or at least stop and look again. So you try one of our Dipping Sauces. I also hope that you will continue to imagine that the guy doing all the typing knows what he is talking about. If you do, keep tuned in for further stories of taste and fun. Let’s get started with the first sauce that got this whole group started:

Combine all ingredients in a large pot, bring to a boil, then simmer 30 – 45 minutes. Make sure to stir frequently to avoid sticking. You can either strain the pepper pieces out for a clear liquid sauce or purée after it’s cooled to blend everything. Reheat if you blend it. Put in 8 ounce jars and process. To serve just carefully pour into serving cups or squeeze bottle. Dip your favorites. Enjoy the taste.  If you don’t want as much heat use Bell Peppers in place of the Habanero Peppers. Remember that when you are working with peppers, use disposable gloves to protect yourself.

So after this first recipe you see what a dipping sauce is. I have only given you recipes with one juice. If you use multi juices, try not to let one over power the other. Make it a good mix, something that when you eat, you will be able to taste both fruits. So buckle up, here is the next recipe.

10 ounces peach purée, canned are ok if you drain them good. Fresh is the best.

The best of the fresh is free stone peaches for this sauce. The peach pulls away from the pit. Cling peaches are the type that where the meat of the peach clings to the pit.

Early peaches are usually the cling type. The freestone coming in later in the year.  In Georgia our peaches started about the middle of May. We don’t get the “Freestone”  type till late June and early July. These are usually the bigger, juiciest peaches. I guess I am like the salesman who when ask “Do you have anything better?”. I have to say only the next one you are going to eat. Both types of peaches good, but I like the later season usually the sweet juicier of them all.

Living in Metro Atlanta, this had to be called Hot’Lanta. That is the name we call our state capital during the summer. We get so many beautiful days all year-long but it is hot as H*#$* just a few days in the summer. Well that’s my story and I’m sticking with it.

1 quart peach juice (Bottled Peach Nectar or made from fresh peaches that you sugar and let set and then drain the juice.

5 cups sugar (if you use the sugared peach juice cut down on the sugar. If you use 2 cups sugar to get your juice, then only add 3 cups more)

Combine all ingredients in a large pot. Bring to a full boil, the cut the heat and simmer. Simmer 30 – 45 minutes (till the sauce starts to thicken), stirring often. Put in 8 ounce jars and process.

Make Sure that you remove the seeds and membrane from the peppers.  Again combine all ingredients, bring to a boil. Then simmer till thick. Put into 8 ounce canning jars and process. Try to use red & green peppers for a more colorful sauce.

Awesome with little pieces of ham as an appetizer, or you can pour over a Pork Roast or Ham during the last 3o minutes of cooking. Leave the cover off for this final part of cooking. 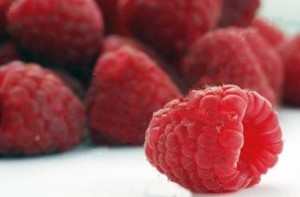 Make Sure that you remove the seeds and membrane from the peppers. Combine, bring to boil, simmer till it thickens. Put into 8 ounce jars and process. This was a sneaky favorite because of the taste of the peppers. Chipolte Peppers are dried and smoked Jalapeno’ Peppers. When you dry a pepper you concentrate the flavor. It really makes it intense. It’s heat can also surprise you. So go ahead cautiously.

Most thought this would go with Sausage Balls, definitely Jalapeno’ Poppers and Chicken Nuggets. In fact this sauce had the most uses of all the sauces according to our customers.

1 1/2 cups finely chopped pineapple, you can use crushed if you don’t have fresh pineapple 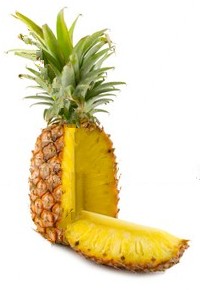 Make Sure that you remove the seeds and membrane from the peppers. Combine all ingredients, bring to boil then simmer 30 – 45 minutes till thick. Put in 8 ounce jars and process.

To go along with the same sauce, add 1/4 cup coconut flakes at start then purée the cool liquid then reheat the final sauce. Gives it a different taste. So maybe make the sauce and divide it in half and use coconut in one of the portions. Use a little less coconut if only half a recipe. This sauce went over so well that we have had to make it in cases for family members.

1/2 cup honey, if you use Wild Flower Honey in place of Clover. Use a little less

Rinse each mustard jar with a little white vinegar to get all the mustard out. Add the vinegar rinse and mix with all the other ingredients until blended well. If you like a little more bite to your mustard add a little prepared horseradish then blend. You can store in any good jar that you can keep in the fridge. Great on any type of pork snacks and on wings or nuggets. 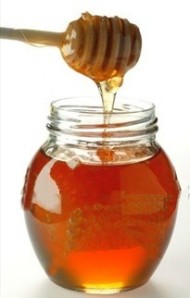 Make Honey Mustard as above, but add

1 tablespoon cayenne powder (or to taste)

1 tablespoon chili powder (or to taste)

1/4 cup Texas Pete Hot Sauce (Do not use Tabasco Sauce, it has salt and that changes the taste).

Combine as above and enjoy.

The is a photo of our full line of dipping sauces. We would have made more with more fruit and other juices. We just did not have the time to dedicate with something new in sauces. We could used Blueberry or Blackberry or other great things that had a juice as strong as the fruit. The problem was the time it took to find the right pepper to go with each juice. Not everything works with all peppers. Some peppers the heat would cancel the fruit taste. In the case of a mild pepper, the juice might dominate. So you see our problem. We always played on making more, just ran out of time. 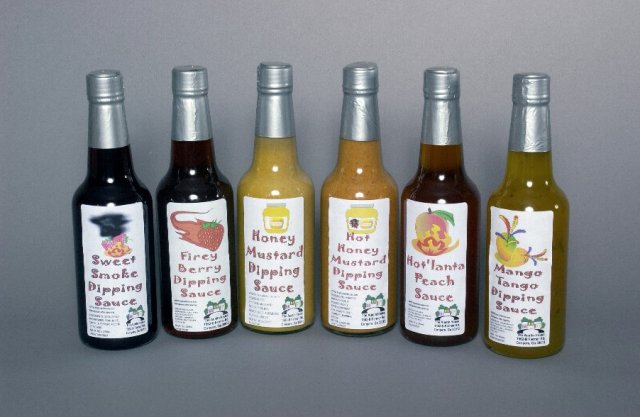 I will also try to keep the future blogs a little shorter. But for the story of Dipping Sauce was a different story and it all needed to be told.

Don’t forget to send me your ideas for the sauces. Also let me know if you come up with a good name for your sauce. E-Mail me at jellymanga@gmail.com