Marmalade has a big “apeel”!

I know it has been a long time since my last blog, but family things took up my time. We had my 5 year old grandson visiting: this left me litle time to write. So lets get back to blogging.

Have you ever wondered why there is no Orange Jelly, Lemon Jelly or any other citrus fruit made into a jelly? It is not a mistake. They don’t make jellies or jams from these delicious fruits. They do make something else…. they make Marmalade. I think everyone has seen Orange Marmalade. It

is pretty much the same everywhere you go. If you have a chance to visit England, and so many did for the Olympics, they found marmalade a main condiment on British tables. They enjoy marmalade on croissants and toast points. Very rarely did you see jellies or jams. You had to ask for something other than marmalade with your meal.

According to Wikipedia Marmalade is a fruits preserve made from the juice and peel of citrus fruits, boiled with sugar and water. In languages other than English, “marmalade” can mean preserves made with fruit other than citrus. For example, in Spanish the term usually refers to what in English is called jam (and jalea is similar to the American English jelly). In Portuguese marmelada applies chiefly to quince jam (from “marmelo“, the Portuguese for quince). In Italian too, marmellata means every jam and marmalade, as it does Mermelada in Italian-influenced Rioplatense Spanish. Also in Germany, where marmalade is much less popular than jam anyway, Marmalade is the traditional designation for any kind of jam and marmalade (especially smooth jam without visible pieces of fruit) regardless of fruit base, and remains so in everyday language.

I know that was confusing and a lot to swallow, so I will make the rest of this blog in simple terms (something I know best). 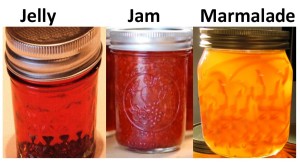 We tried to make Orange Jelly but it came out as a spread not a jelly. It never “firmed up” or looked like jelly.  Mary Lynn said she thought that there was too much acid in the fruit to make real jelly. A small amount of acidity works with the pectin to make a firm, spreadable jelly, so that it is probably the reason citrus fruit is not used to make jelly. I hope that you will try one of these recipes. If nothing else try Orange Marmalade at home or your favorite breakfast place.

There are a range of ideas about Marinades, but to me they are limited to Orange, Grapefruit, 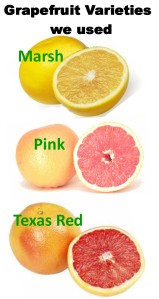 and sometimes even Tangerine. Grapefruit has several varieties, the three that we used were the Marsh, Pink and Texas Red. They all looked pretty much the same on the outside but the inside was different colors for each type. When you buy in the store you just take for granted that the name is the right one. Each has a little different flavor. The marsh is the most bitter, pink a little less and the Texas was the least bitter-tasting.

Our biggest seller was made from something that a customer gave us in South Florida. They said it was an oriental fruit that tasted like a mix of lemon and lime. We could never find a name for this fruit, we called it Lymon (not very origianal, we know). They were larger than some of the grapefruit in her yard. They were about six inches in diameter. She also said that we should only use the ones on the tree, the ones on the ground were no good to use. We still picked up a few to try anyhow. We found that she was right, they ones that dropped off the tree seemed to change flavor and became something nasty tasting. This fruit, whatever its name was made into a delicious marmalade. I thought, as well as our customers thought that it was the best tasting of all the fruits used to make marmalade.

In our travels around the country we always had signs that said that we would love to trade you our products for any fruit that you had in your yard. We always had people wanting to trade.

Sometimes it was difficult for us due to the large trailer we used. I remember one show in West Palm Beach. We had a lady that said we could have all the grapefruit in her yard. We got her phone number and a map at the show, and told her it might be a little late when we got to her home. We showed up about 11 o’clock in the evening to do the picking. She had the best outdoor lights I have ever seen. Each tree had lights around it so picking was no problem. We did run into a space situation due to the number of fruit she had. We picked at least eight laundry baskets of grapefruit and three or four baskets of Navel Oranges. She also had Myers Lemons. We only picked two baskets  of them because we had run of space to carry anymore. You might ask why laundry baskets: it was the only thing we could think of to hold what we were picking that would let air around the fruit. That and the fact that the only store open on a Sunday night was a store that sold everything for $1.

I had covered the floor of our trailer with baskets, and had even used the back seat of our truck to hold four more baskets. All the way home we were coming up with ideas and plans on how to use our new treasures. It was amazing how your mind just sort of shifts to the recipe mode when you have plenty of things to cook with. Well let’s get back to making Marmalade. One more thing before we get cooking. Try to buy organic fruit if possible. If not scrub your fruit very well. The outside of the fruit (used in marmalades) might have a pesticide on it, organic is free of such things.

Let’s get started cooking with Orange Marmalade:         6 cups Sugar, 1 teaspoon Kosher or Sea Salt, 4  oranges, a lemon (used for it’s acidity), 2 cups water. Peel the Oranges, and Lemons and slice the outer peel very thin (tiny thin strips works best). You can also use a zester. You only want the colored part, trim off the white inner membrane. Boil the peel in water for 5 minutes, this makes the peel really soft and pliable. Add orange slices that have also been trimmed of the white membrane. Also remove any seeds. Next add the lemon that has been peeled clean of membrane. Next add the sugar and cook til mixture comes to boil. Lower the heat and cook til thickened (about 45 minutes) stirring to keep from sticking.

Carefully put in 8 ounce canning jars that have been cleaned and sterilized. After the fruit mixture has been added, take a paper towel that has been damped and clean the rim of the jar. Put on a dome then a ring, finger tighten the ring. That means not tight as you can tighten or too loose so the water can get in. Place the jars in a boiling water bath and process 10 minutes. Make sure the level of water is at least 2 inches above the tops. Carefully remove and place on a drying rack or towels to cool. After cooling, check for jars that are not sealed. They have to be reprocessed.

Grapefruit Marmalade is made the same way you do orange. The only difference is the type of grapefruit you use.

The types served at most tables is the Marsh Grapefruit. Another type that is becoming popular is the Pink Grapefruit, similar in taste to the Marsh, but just a little bit sweeter in taste. A variety that people are least familiar with in our area is called Texas Red Grapefruit. They look just like other grapefruit, but when you cut it open the look tells you just what kind it is. They have a bit sweeter taste vs. the marsh types.

Grapefruit is a great type of marmalade to add another fruit. The taste is not like anything you would expect.

One of the most popular combinations was Kiwi-Grapefruit Marmalade. The other favorite was Strawberry-Grapefruit Marmalade. We had plenty of Kiwi to work with because Kiwi is really popular for Middle Georgia farmers. They are a favorite due to the low maintenance compared to other fruit. Supply of Strawberries were available most of the year. The recipe for both is the same just substitute Kiwi in place of Strawberry. We also used Blueberries with Orange Marmalade. Again just use blueberries in place of strawberries in the next recipe.

Strawberry Grapefruit Marmalade 4 cups strawberries (or kiwis) chopped. 6 cups sugar. 3 cups grapefruit that has been peeled, the membrane removed and deseeded, then chopped. 1 cup membrane free lemons, chopped. 3 cups water. Chop grapaefruit, lemons, strawberries (or Kiwi). Cook to boil, then lower the heat and cook til thickened (about 45 minutes). Always stirring to keep from sticking. Put in prepared 8 ounce canning jars (or 16 ounce). Process in boiling water bath 10 minutes, make sure that there is 2 inches of water over the top of the jars. Remove from water and place on a cooling rack or counter top to set at least over night. Check for jars that didn’t seal, they have to be reprocessed with new domes. The rings are reusable. This recipe will also work with oranges instead of grapefruit.

Just as I get rolling. I look at the word total at the bottom and it tells me to save what I was going to use for another blog. So check back, or even better subscribe to my blog. If you do, you will get new blogs delivered to you via e-mail. Well there is plenty of room in future blogs.

Don’t forget…. let me know what you would like to make or any ideas you have for the next blog. Also if you have any questions you would like me to try to solve. Just drop me a note at jellymanga@gmail.com.

Don’t keep my blogs a secret, pass the word on to your friends, neighbors and family members. They just might make something and share with you.

Don’t forget, if someone asks you can you can it?

Say YES I can can it.

My wife, Mary Lynn and I had a very sucessful canning business for over 15 years, called The Austin House Jams & Jellies. We had to close it due to pure health. I will be writing a blog about some of the recipes, and how to use them. Also some of the interesting, funny, weird things that have happened in our traveling with the business. If you follow me, you will see that I look at things just a little different than others. If you look at the header at the top of the page, you see that I am looking at things. Making sure eveything looks as good as possible.
View all posts by Pete Austin & The Austin House →
This entry was posted in Award Winning, Blueberry, Cooking, Food Preservation, Fruit Syrups, Grapefruit, Home Made, Kiwi, Marmalade, No artifical ingredients, No preservatives, Old Fashioned, Oranges, Organic, Preserves, Recipe, Strawberry and tagged All natural, austinhouse.biz, Award Winning, Bitter orange, Blueberry, Boiling Water Bath, Canning, Citrus, cook, Cooking, Food Preservation, Fruit, Fruit preserves, Fruit Syrups, Grapefruit, Home Canning, Home Made, Home made gifts, Juice, Kiwi, Marmalade, Marmelade, No artifical ingredients, No preservatives, Old Fashion, Old Fashioned, Orange, Orange Jelly, Orange Marmalade, Oranges, Organic, Preserves, Recipe, Rioplatense Spanish, Strawberry. Bookmark the permalink.