From out of the mouth’s of Babes

While visiting with my grandson using Skype, I asked him to name some fruits that I could write a blog about. After a few minutes thinking, he started with his list. Some of the items I expected but some were a little surprising. First was avocados, yes he said avocados. A bit of a surprise because he is only 6 years old. Another surprise was he knew that they are a fruit. He came up with a few more names but they were not fruit. He insisted that pizza was a fruit. Next on his list was tomatoes, followed by cherries ( I should mention that the tomatoes he mentioned were Cherry Tomatoes). Oranges followed by apples which completed his top five things for me to write about. I think that if he had thought a few more minutes he would have come up with pumpkin. Pumpkin pie is his very favorite. He is seen sampling his favorite at a pie festival. I think at 6 years old my list would have been very different.  I guess that the new generations are looking at things different from our generation. My generation thought that a Tootsie Roll was a fruit at 6 years old, followed by a Tootsie Pop. 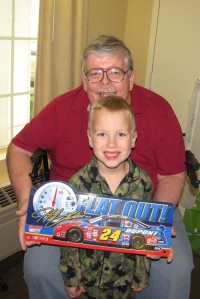 He brought me a sign for my favorite Nascar drive.

I told him that I thought he was pretty smart and he said that he was “smarter than a fifth grader”. I think he got his humility from me. While he was thinking up his list he was building something with Lego’s. He made a tractor towing a huge sprayer. He said that the sprayer was spraying vegetables on his pretend farm. He said he was growing tomatoes and lettuce. I commented that he was growing a salad; he agreed. I asked him what the sprayer was spraying on his garden, and he said it was Ranch Dressing. Can’t argue with that kind of logic. one more thing, he would disagree with the title, From the mouth’s of Babes. He would tell you that he is not a babe. He is 6 years old and in home school. baby’s don’t do that. Something else that I need to say. Daniel is a very good cook. He has made several things with his mother. He started cooking with a play kitchen as soon as he could walk. He even had play fruits and vegetables that he worked with. So cooking is in his blood and I look for great things from him in the future.

With all my list to work from, I decided it was time for me to come up with some recipes for his list.

About the only thing I ever made from avocados was Guacamole or sandwiches with bean sprouts and lime mayo on black bread. I also put slices on my chicken soup (like what we ate at my favorite Mexican restaurant . They called it Sopa-de-Pollo (or something like that). Canning with this soft delicious treat was totally alien to me. I have tried some prepared Guacamole from grocery stores, and didn’t like it even just a little bit. So I am going to have to plead the Fifth Amendment on this one and more on to the next name on the list. In the mean time, I am researching this, if you have any suggestions, please let me know.

I have posted many different recipes using tomatoes as one of the main ingredients, the best being salsa. The link for one of those blogs is https://canucanit.wordpress.com/2012/07/20/do-you-know-salsa-no-not-the-dance-the-other-kind-of-salsa/.  I have made tomato preserves and I can’t find a recipe in my past blogs so how about I give you one now. That is to make up for zip recipes on avocados.

Tomatoes Preserves: 8 cups tomatoes, peeled, chopped, 4 cups sugar, 2 teaspoons ground ginger, 2 teaspoons fresh lemon juice. Combine tomatoes and sugar, let stand 10-15 minutes. Add other ingredients, bring slowly to a boil, stirring gently to jelly
stage. Put in prepared 8 ounce canning jars. Take a paper towel and clean the rim before putting on the dome and ring. Finger-tighten the ring. Process 10 minutes in boiling water bath with at least 2 inches of water over the top of the jars. Carefully remove and let stand overnight. Check the jars and make sure they all sealed. If not you have to remove your ring/domes then re-clean the rim and place a new dome on and re-tighten then reprocess. This was a favorite at my grandmother’s table while I was growing up.

While I am here, how about a chutney that was a major seller. This I hope makes up for my fifth amendment on first choice. Chutneys are so good on so many different things. Maybe real soon I will devote a whole blog to them.

His third fruit is cherry. I am sure I have never given you any recipes for cherries. My favorite is made with Michigan Cherries. I like them because of just the right tartness.

Cherry Jam: (1 bag of dried cherries equals 16 cups). If you use dried cherries, pour two cups of hot water over them and let them set for about 2 hours. Stir and let set again. This will rehydrate your cherries and make them workable. Make sure you have no pits, they make a problem when you bite down on them. Chop 8 cups into small pieces, leave 8 cups large pieces (This gives your jam a major chunky texture that is extra special on a hot biscuit. Also not too bad on vanilla ice cream). 7 1/2 cups sugar. 1 tablespoon fresh lemon juice. Mix fruit and 1 box pectin together. Bring the mixture to a boil then add the sugar. Cook till a full rolling boil comes back then remove from heat. Using the instructions above put into canning jars (8 ounce or 16, you know how fast your family goes thru jam). Process 10 minutes in a boiling water bath. Remove and set till cool. Check for seal.

You can use the same recipe for Black Cherries or Sweet Cherries or Bing Cherries. If you use fresh, invest in a pit remover. It won’t take you but one episode of a pit in your jam to make the investment worthwhile. It can be put in your kitchen tool drawer and maybe have another use later on.

Name #4 is Oranges. Daniel lives in Central Florida so this was an easy pick for him. The first thing that comes to mind when I hear any citrus fruit is Marmalade. I have at least 10 different recipes for Orange Marmalade, so I will pick the one that looks the easiest. Sound OK to you?

Served on a toasted English Muffins is pure joy!

Orange Marmalade: 6 cups sugar, 1 teaspoon salt, 4 oranges medium size works. 2 lemons. 2 cups water (sound strange?) Peel oranges, lemons and then cut out sections. You don’t want this membrane, the tough strips that divide the sections.  Using a very sharp flexible knife slice the orange peel making sure to remove the white membrane, into very thin strips. Make sure that you don’t have any white on these strips. Boil the citrus strips in water for 5 minutes and drain. Using 1 cup of your sugar cook the strips to make them like candy. Add rest of sugar and fruit sections together in a heavy-duty cooking pot. Bring to a boil, then add citrus strips. Heat til mixture comes to boil, cook til thickened (about 45 minutes) stirring to keep from sticking. Put in 8 ounce canning jars. Use process above. Process in water bath 10 minutes. Marmalade is a favorite of the English people who I know. I guess the fact that they don’t have access to fresh fruit that is grown in the United Kingdom factors in on this. Plus the fact that I think there is no better way to eat marmalade than on a toasted English Muffin that has been generously buttered then marmalade applied generously. It has to be the best!

I hope that I have  covered the list items in a manner that Daniel would approve. The only thing left is Apples. I have given you many recipes for apple butter so far in my blogs. If you missed them they are listed on the right in the archives. Have trouble, just drop me a note and I will send you a few recipes back in an e-mail. I think the major use of apples in your eating, other than fresh, is Apple Jelly. I am going to give you a recipe for making jelly from juice that you got from cooking apples. I will also tell you how to take a short cut and use bottled juice. Not everyone wants to go to the trouble of working with fresh apples.

Apple Jelly: Put chopped apples, peel and all in small pot, add very small amount of water. just enough to cover. Bring to simmer, stirring frequently. Cook till pieces are completely cooked, strain the pulp and let drain for a long time to get juice. Strain juice thru muslin cloth to clear. 3 1/2 cups apple juice. 5 cups sugar. 1 package fruit pectin. 2 teaspoons fresh lemon juice. Combine juice, lemon juice and pectin. Bring to boil for 1 minute. Add sugar and bring back to boil for 1 minute. Put into 8 ounce canning jars. Process 10 minutes in water bath. Using the process above. This makes jelly  that is great to look at and even better to eat. A little unknown note. The color of your jelly will be similar to the color of the apple. Granny Smith will have a green tint, Rome apples will look red. With your left over pulp, make apple sauce or apple butter.

What kind of apple???

Apple Jelly from bottled juice: Use the same recipe, just use apple juice from a bottle. One thing very important, make sure it is 100% apple juice not juice from concentrate. If you use the juice from concentrate you are using juice made from apple concentrate and water added. The concentrate is obtained by boiling the juice from cooked apples (the first recipe) down to a concentrate that can be bottled and used in factories all over the country. You have no idea where your apples are from and no idea what kind of apples used. Is it Rome, Macintosh, Red Delicious, Yellow Delicious? The idea that the jelly resembles the apple used makes you wonder when you look at the juice. What apple looks like that? So the choice is up to you, real or not? Tastes good, or maybe just a little. Once you have tasted real apple jelly, the stuff in the store doesn’t hold a candle. So give it a try, who knows, you may start a family tradition.

Don’t forget…. let me know what you would like to make or any ideas you have for the next blog.

Also if you have any questions you would like me to try to solve. Just drop me a note at jellymanga@gmail.com.  Please feel free to SHARE my blog on Facebook or Twitter or even MySpace.com, or any place else you can think.

I want to get as many people exposed to the good things as possible. So share and ask your friends to share, PLEASE. They just might give you something that they made to say thanks for the share. Don’t keep my blogs a secret, pass the word on to your friends, neighbors and family members. 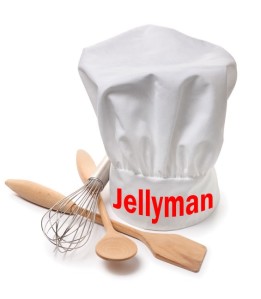 Don’t forget, if someone asks you can you can it?

Say YES I can can it.